The True Life in God

This page gives a short introduction to the revelations of God given to Vassula Rydén since 1985.

Vassula Rydén who is Greek, born in Egypt on Januar-18th, 1942, belongs to the Greek Orthodox Church. God approached her back in 1985 while she lived in Bangladesh in a most extraordinary way to use her as His instrument and charge her with His messages for all mankind. In truth it is a reminder of His Word. In these messages for our times, God is calling us to repentance, reconciliation, peace and unity.

In the very beginning of God's intervention she was totally confused and feared she was being deluded; this uncertainty was truly her biggest cross, since she never heard in her life before that God can indeed express Himself to people in our own times. Because of this she feared and tried to fight her experience away, but instead of diminishing, God approached her even more intensively. As the sacred communication progressed there was perceptible change as Vassula grew in faith, knowledge and love of God. Her need to seek reassurance lessened, she became more comfortable in this unusual role which in turn allowed fuller statements from her divine visitor.

The principle motive throughout is the divine love of Jesus expressed in the bridal terms, characteristic of mysticism, but manifested as an effulgence, an outpouring of the ineffable love of Christ. The fact that Vassula, without ever having received any catechetical instruction, let alone theological formation, is able to write about such profound spiritual matters without committing any errors, is itself a powerful confirmation of the authenticity of her messages.

Since 1988 Vassula has been invited to speak in more than 60 countries and has given over 800 presentations. Vassula receives in all of this work no personal royalties, fees or benefit for her efforts. So far the books have been translated into more than 40 languages. They are written in such a clear and direct language that anyone of reading age can understand them. At the same time their content is so rich and profound that brilliant theologians have been inspired to write books about the spirituality of the messages. God himself has chosen to name these divine messages: True life in God. Wherever she is invited, whether in Asia, the Americas, Australia, Africa or Europe, she is welcomed by crowds of people of all ages from every imaginable social class and milieu, both Christian and non-Christian. Among those who come to hear her testimony are not only lay people, but also their spiritual leaders and hierarchy. Also other religions, like the Israeli Jews invited her, as well as the Buddhist monks of Hiroshima and of Bangladesh to give her testimony. The attendance of her meetings has reached up to 400'000 people and among them, in some countries there could be Muslims, Hindus, Buddhists and Jews. 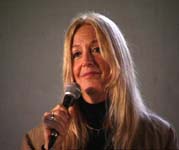