The Poem of The Man-God 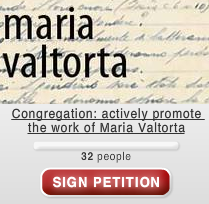 This page gives a short introduction to the revelations of God-Son (Jesus) given to Maria Valtorta around 1943.

The photo of Maria Valtorta below was taken on Feb.19th 1943 by Fr. Romauldo M. Migliorini, a pious missionary priest and her spiritural director for four years. In the same year, at his request she wrote her AUTOBIOGRAPHY. Within a year she was writing down her visions, and within five years and a week, Pius XII cautiously approved the publication of her writings regarding the Gospel. Millions of readers around the world in many languages await the action of the Bishop of Florence, Italy, to begin the investigation into the cause for her sainthood.

Maria Valtorta was born on March 14th 1897 in Caserta, Italy. After a long-lasting suffering from sickness she died 1961. Her greatest heritage is the "Poem of the Man-God". In this work, life and suffering of our Lord Jesus is outlined partwise in precise detail. It narrates the birth and childhood of the Virgin Mary and her Son Jesus; the three years of Jesus’ public life (forming the largest section); his passion, death, resurrection, and ascension; the beginnings of the Church; and the assumption of Mary. Within 3 years Jesus gave visions of his live to M.Valtorta, his 'instrument'. These visions supplement the analog passages of the Holy Bible, making the time around 30 p.Chr. in a fascinating manner animated. The greatly-revered Gabriele M. Allegra, who highly esteemed Valtorta’s work, wrote, “Gifts of nature and mystical gifts harmoniously joined together account for this masterpiece of Italian religious literature and—perhaps I should say—of Christian literature on a world level.” The Poem of the Man-God, is a worldwide success of spiritual literature illuminating the Ghospel, for the purpose of reviving in men’s hearts love for Christ and his Mother. The english edition of the "Poem of the Man-God" is a series consisting of five volumes. Volume one contains a short but notable biographical sketch of Maria Valtorta.

The titles of the 5 volumes:

Each volume consists of several chapters, in total 714 chapters.

Maria Valtorta was born in 1897 in Caserta, Italy. In 1916 the Lord attracted her to Himself by means of a dream which was to remain vivid throughout her life. In an evangelical vision, which seemed to anticipate the waking visions of her literary work, Jesus aided Maria with words of admonishment and piety.

In her early 20's and in the spring of 1920, while walking along the street, she was struck in the back by a young delinquent. With an iron bar stripped from a bed, he came from behind and struck her with all his might. She remained confined to bed for three months, just a sample of what was to be her future complete infirmity. January 4th, 1933 was the last day Maria was able to leave her house and after April 1, 1934, she was no longer able to leave her bed.

Her activity as writer reached intensity from 1943 to 1947, and continued, diminishing progressively, until 1953. The notebooks written by Maria included almost fifteen thousand handwritten pages. A little less than two-thirds of this outstanding literary production concerns her monumental masterpiece on the Life of Jesus: THE POEM OF THE MAN-GOD. The minor works include extensive commentaries on bilical texts, doctrinal lessons, histories of the first Christians and martyrs and pious compositions. "I can affirm" - one of Maria's declarations reads - "that I have had no human source to be able to know what I write, and what, even while writing, I often do not understand."

In lofty literary style, the POEM describes landscapes, environments, people, and events with the vividness of graphic depiction. It presents characters and situations with introspective insight and sets forth moments of joy or drama with the feeling of someone really taking part in them. It provides information on the characteristics of settings, customs, rites, and cultures with convincing detail. By way of a gripping account of the Redeemer’s earthly life, especially through discourse and dialogue, the work sheds light upon the whole doctrine of Christianity in keeping with Catholic orthodoxy.

Maria died in 1961 at the age of 65. With ecclesiastical permission, her mortal remains are now venerated in the Capitular Chapel in the Grand Cloister of the Basilica of the Most Holy Annunciation, in Florence, Italy. Chiseled on her tomb are the words: "DIVINARUM RERUM SCRIPTRIX" (Writer of Divine Things). Maria's home in Viareggio, has been beautifully restored so that pilgrims may visit the place where she lived & wrote. Viareggio ("way of the kings") is on the northwest coast of Italy, north of Pisa.

Allthough the work "The Poem of the Man-God" is not yet approved by the church, it was heared that Pius XII said acknowledging: "Publish this work as it is. There is no need to give an opinion about its origin, whether it be extraordinary or not. Who reads it will understand".